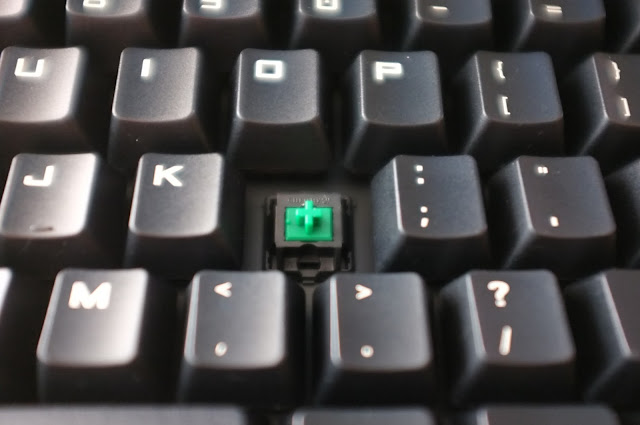 After working hard to winnow down my keyboard collection from one each of Filcos with Cherry Browns, Blacks, Blues, and Reds, and even a "fake" White Alps version, down to just a Filco Red and an array of Topres, I had to break down and try out the newest Cherry on the block in a commerically available keyboard, the CM Storm QuickFire Rapid with MX Greens.  At an impressive 80 grams of accuation force, it is said to be the closest in feel that Cherry has come to reproducing the vaunted buckling spring key switches from the old Model M keyboards.  Buckling spring technology was what lured me into the crazy world of mechanical keyboards to begin with, so I understandably had to find out how close the Greens had come to replicating buckling spring tactility.  At the same time, I wanted to see how close Cooler Master's mech 'boards came to the gold standard set by the legion of Filcos I've owned. 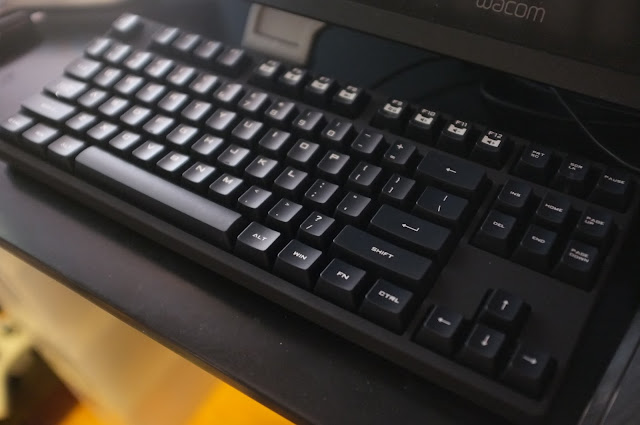 I'll answer the second question first:  CM is very, very close to Filco in quality.  In fact, if you prefer a detachable USB cable, or if you'd simply prefer to save around $20-$30 on any given keyboard, CM is a very viable alternative to Filco.  The key feel and quality of construction is highly comparable.  The CM font is a bit more esoteric than the one used on Filco, but they've even begun to offer a side-printed option that is comparable to Filco's "Ninja" series.  Bottom line, if you're looking to invest in your first mechanical keyboard and are interested in Cherry key switches, a CM Storm QuickFire Rapid would be my recommendation.  For the complete novice, Cherry Browns would be the logical first step; touch typists with a lighter touch (like me) may prefer the Reds, while hardcore gamers who like to mash buttons may prefer the Blacks.

As for the Greens in particular:  While they're closer to buckling springs than the somewhat lackluster (in my opinion) Blues, their high actuation force makes them impractical for daily use, at least for someone who has been spoiled by the lighter actuations of Topre capacitive switches and Cherry Reds (which remain my favorites, in that order).  If you're a typist who prefers Blacks but would like some tactile and clicky feedback, the Greens may fit the bill.  I was once such a typist, but the lighter key switches in my current stable have ruined me for the heavier switches.  If your preference run in a similar vein, you'll probably find the Greens too stiff for prolonged use.

As a result, my top Cherry recommendation still goes to the MX Reds and Browns, simply depending on whether you prefer smooth or tactile actuations.  By all means, give CM's line a try - but be prepared to fall down the mechanical keyboard rabbit hole if you do.  And believe me: it's a long - and expensive - way down, but you'll love every minute of it.
Posted by admin at 7:00 AM No comments:

Email ThisBlogThis!Share to TwitterShare to FacebookShare to Pinterest
Labels: It's On Amazon, Keyboard Review, Keyboards 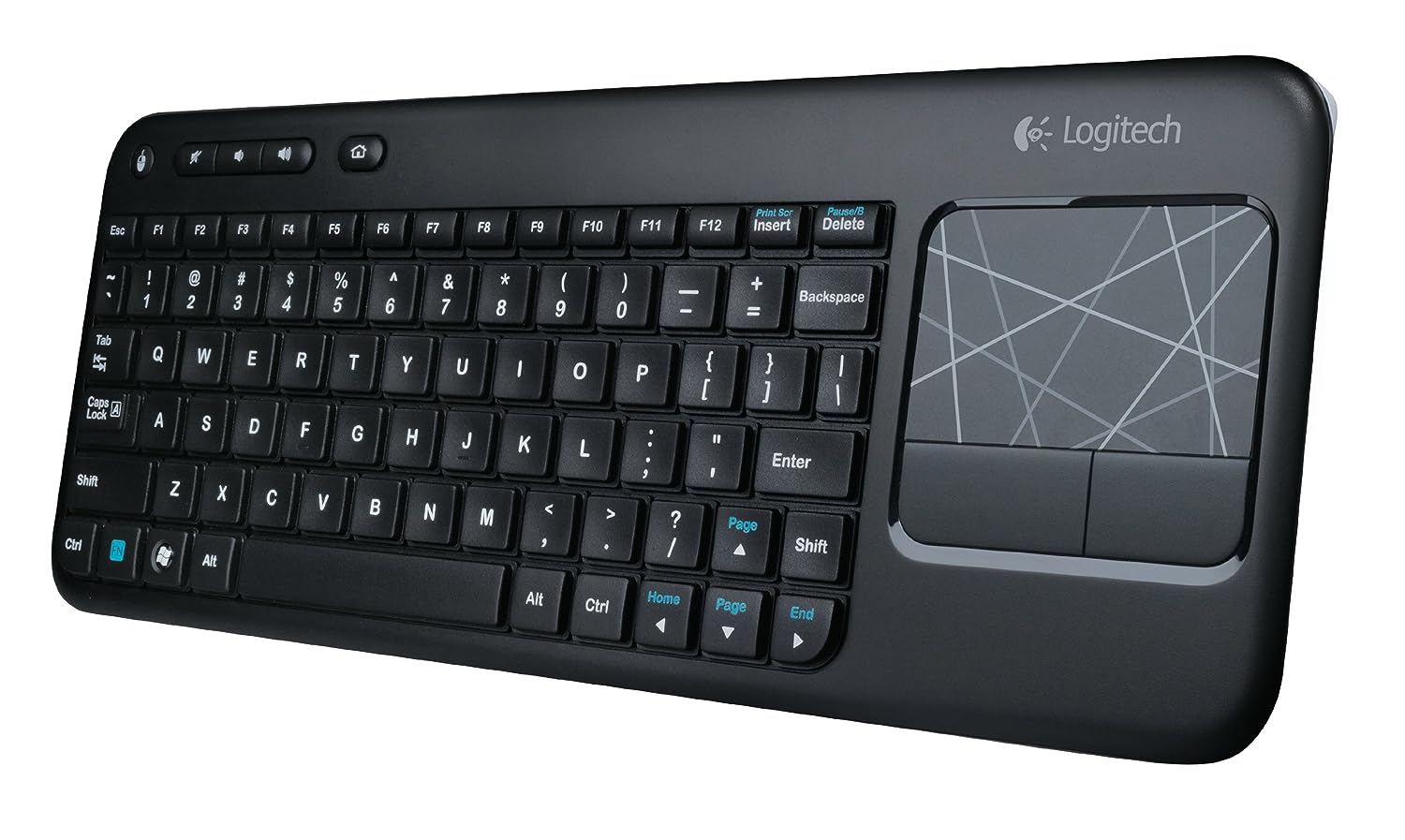 Being an inveterate mechanical keyboard user - OK, snob - made me postpone this review for several weeks.  I haven't returned to membrane keyboards since I upgraded to a Unicomp buckling spring 'board in college.  One of the first things I invariably I do when settling into a workspace is swap out the stock-standard membrane keyboard with a mechanical - either a Cherry MX red or Topre capacitive.  So how did it come to pass that the current mechanical keyboard on my desk - a Leopold 660C - has come to play second fiddle to a Logitech membrane keyboard that you can find on Amazon for less than $30?

It began when I was shopping for a good HTPC keyboard for my dad and ended up choosing the Logitech K400 for its integrated touchpad and a strong aggregate of reviews on Amazon.  He loves using it, and I was surprised at how comfortable the membrane keys were to type on.  The best description I can give for the tactility is that it is a cross between traditional membrane keyboards and scissor-switch laptop-style keys.  It requires a little more force on average thanTopre capacitive switches, but the shallower key travel seems to make up for it.  Response is of course less accurate, but good enough that I only find myself compelled to switch back to the 660C when typing for extended periods.

I switched to the K400 as my primary keyboard mainly because my current desk setup sometimes requires that clear the space on my desk where I usually keep my keyboard.  I tried using the 660C there with a Filco keyboard roof, but I need the flexibility on occasion to clear out the space and pull my Cintiq up to the edge of the desk space when I'm working on an illustration.  Also, since I've switched my desk chair from an Embody to a Swopper, I occasionally like to use the Swopper as an improvised footrest and recline back in the Embody, especially when watching videos for extended periods on my landscape aspect 24" monitor.  Having an HTPC-style wireless keyboard with a built-in touchpad allows me to continue to control my computer even in a more laid back configuration.  The K400 excels in this usage.

The touchpad feels like it's on a little on the small side - especially for my setup, where it has to traverse 5 screens worth of real estate - but given the keyboard's goal of portability and top-of-the-lap use, I think it strikes the proper compromise.  The odd design decision to include another physical button for the left mouse click button in the top left corner is actually a useful quirk when you need to make multiple mouse clicks in quick succession.  And the function keys are smart enough to default back to F1 through F12 when depressed in combination with modifiers like SHIFT and CTRL, so that you don't have to add the FN key to the mix.

For a $30 wireless keyboard, it's hard to top the Logitech K400.  I'll probably default back to one of my mechanical 'boards when in hardcore novel-writing mode, but for lighter takes (such as writing this post), the K400 is a fantastic and economical option.
Posted by admin at 7:00 AM No comments:

I've been aware of the EDC phenomenon for several years, but never went so far as to examine my own habits.  This series will take a look at the various goods that I've come across that have made it into my EDC routine, or new candidates to replace existing EDC items.  This introductory post will summarize what EDC is and what's currently in my EDC roster.  Subsequent posts will take a closer look at each item in more depth.

EDC stands for "Every Day Carry," and at its most basic it relates to the items that a person carries with them every day due to their indispensability or usefulness.  In some circles, EDC goes beyond the mere items that populate an individual list to encompass an entire philosophy of life or modus vivendi.  (For more information, forums like the EDC Forums make for great learning grounds.)

When it comes to technology, I tend to squeeze out as much utility as I can before giving in to the inevitable upgrade.  Which explains why my cellphone is going on 2.5 years.  With a much-delayed Android ICS 4.0 update, it's occasionally on the slow side, but still going strong.

I'm a firm believer in carrying a small flashlight on your keychain, as it can be a lifesaver whenever light suddenly becomes a precious commodity (which can happen more often and unexpectedly that you'd think).  This titanium LED light runs on a single AAA and has high and low settings.

The Le Hook is the best amalgam of security and ease of removal that I've found in a key ring.

I always try to keep a pen at hand (even when paper or other writing surfaces may not be), and the best solution I've found is the Penpod.  It's the perfect size for my hand, and fits well on a keychain.  My only gripe is that the pen can be detached accidentally and lost (as has happened to two of these under my care), but I prefer the twist mechanism used here over the magnets used in other keychain pens, mainly in consideration of my USB drive and mechanical watch.

Incredibly small and inexpensive, there's no reason not to keep vital files on a USB drive like this on your keychain as an extra layer of backup on top of whatever cloud service you might fancy.  Having a USB drive handy for file transfers is another thing that, once you've gotten used to it, you may find that you can't live without.

I've used Slimmy wallets since replacing a worn slim bifold with an ID Slimmy in 2010, and I've become a huge fan of their design.  The X Slimmy is even slimmer than the regular model, and when your preferences are as minimalist as mine (a few bills, five cards), this is the perfect wallet.

Actually one of five watches that I use in rotation, if I were forced to pare the collection down to one, this would be it.  Preeminently legible dial, rock-solid Lemania handwound chronograph movement, solid Omega fit and finish.

For a taste of what EDC entails for someone like Adam Savage, of Mythbusters fame, check out the video below: