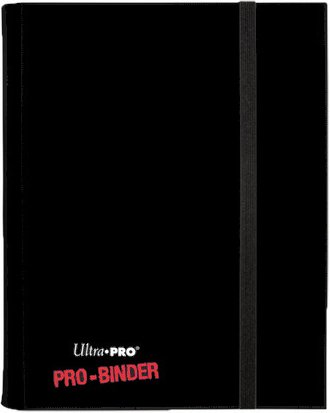 One of my ongoing organizational challenges is - as I'm sure many collectible card game (CCG) players encounter - is managing my collection in a way that allows me to have ready access to the cards that I might need to assemble a deck on short notice.  One limiting factor is that several deck designs may require the same playset of cards (in Magic: The Gathering (MTG), four copies); so long as one deck is built, the other has to remain in a perpetual state of incompleteness, until the missing cards can be swapped from one deck to another.  This is an acceptable complication when two decks are involved, but when the decks multiply this musical chairs exercise can make it easy to forget where a particular set of cards ended up last.

The simplest solution would be to obtain as many playsets as needed; becomes unfeasible, however, when the cards in question cost as much as $50 a copy, as the hottest staples in Standard sometimes do.  I've attempted to use card binders to give a bit more organization to the cards that every deck seems to need, but splitting four-card playsets across nine-card pages makes for uncomfortable and nigh untrackable splits between playsets.

The solution I've come up with is a series of four-cards-per-page binders by Ultra-Pro called "Pro Binders." These are Ultra-Pro's take on the popular Monster Binder series, which use side-loading slots and textured back surfaces to ensure that cards don't slip out of position in transit.  In my opinion, Ultra-Pro improves on Monster's design by allowing more play in each slot, so that sleeved cards of MTG size fit comfortably, and both sides of a page can be utilized without over-stuffing the binder.

If you collect and/or play a CCG that uses an up-to-four-copies deck construction rule like MTG, the four-card Pro Binder might be a practical solution to keeping deck staples readily on hand.  For those CCGs that use different construction rules, or for those that prefer the more traditional nine-card-per-page binder format, Ultra-Pro also makes Pro Binders in a nine-page format.  I use them to store the vestiges of my older CCG collections - Star Trek, Star Wars, Battletech, etc. - and I find them preferable for cards that won't be called to deck duty anytime soon.
Posted by admin at 7:00 AM No comments:

So, hot off the heels of my ecstatic experience with the FC660C, I decided to check out the FC660M, which is the same 60% Leopold keyboard, but with Cherry MX Red switches.  In my mind, the result would be a FC660C with a seemingly lighter actuation force, which is how the Reds in my Majestouch 2 Tenkeyless feel.  Less than a week later, having received the FC660M from a reputable eBay seller, I found the reality to be somewhat different.

To start off with, the C and M models have a few more differences than the keyswitches they use.  The keycaps on the FC660C are virtually identical in shape, texture, and color to the black keycaps from my Realforce 87U.  The FC660M's are markedly different.  They feel flatter when typed on, as they don't cradle the pads of your fingers the way that the Topre-style keycaps do.  Also, for some reason the normal-sized Windows key on the FC660C is swapped out on the FC660M for a 1x-sized key with a keyboard pictograph.  The DIP switches, along with the USB Mini-B ports are also located in different spots on the C and M models.

The result is that despite its virtually identical layout, the FC660M feels like a vastly different keyboard from the FC660C.  For someone who absolutely fell in love with all aspects of the FC660C, this results in a measurable degree of disappointment.  Worse yet, for someone who likes the feather-light actuation that Reds can provide, the Red switches on the FC660M feel heavier than the Reds I've used on Filco boards.  I'd almost say it feels stiffer than the Topre switches on the FC660M, and without the benefit of the Topre's snappiness, the result feels clumsier and unresponsive.

I planned to take advantage of the seller's generous return policy, until I realized that return shipping back to China would take a $30+ chunk out of that refund.  Instead, I've posted it to eBay so that I can recoup a bit more of my investment and someone else can snag a brand new (minus a few test sentences) FC660M for less than the going rate among Chinese sellers.

Before plunking down for the FC660M, I was torn between it and the Filco Minila.  I went with the FC660M because of my satisfaction with the FC660C, but now I wonder if I should try the Minila to see how I like Filco's Reds in a compact format.  It's even possible that I might prefer the Minila's layout - particularly its dual function keys - to the FC660C's.  Only time - and this blog! - will tell if I recoup some of my FC660M investment and use it toward giving the Minila a try.
Posted by admin at 7:00 AM No comments:

I seem to have the devil's own luck when it comes to keyboards.  (Whether that is a good or bad thing, though, is open to debate.)  Several years ago, I managed to snag one of the limited edition Filco tenkeyless keyboards with Cherry MX Red switches back when reds were very hard to come by.  I did so by happening upon the Amazon link only hours before fellow enthusiasts at GeekHack.org and other internet forums swarmed in and emptied Keyboard Co.'s stock on Amazon.  Likewise, after nearly a year-long hiatus from acquiring new keyboards, a chance visit to GeekHack a few weeks ago led me to discover that Leopold had released a 60% (66-key) mini keyboard using Topre capacitive switches called the FC660C, and that it had been stocked by EliteKeyboards.com.  Having learned my lesson from Cherry Red Filco all those years ago, I purchased one before it could go out of stock - which it did a few days later.

My main reason for picking up the FC660C was the interesting layout.  It occupies the middle ground between standard tenkeyless and compact keyboards like the Happy Hacking Keyboard, in that it includes dedicated directional buttons and a two-button island for the Insert and Delete keys.  As I usually remap my Insert key to open up My Computer, this unique layout seemed custom-made for my purposes.  While I occasionally miss having dedicated Page Up and Page Down buttons, the Function button is situated close enough to those keys that I quickly picked up the two-button combinations.  The only maneuver I can't perform on the FC660C that I used to on a tenkeyless is a two-finger Alt-F4, which requires two hands now  due to the wide space between the Function and F4 buttons.

I'm not sure why, but the FC660C's switches feel snappier than those on my Realforce 87U and HHKB2 Pro.  Others who have reviewed the keyboard on GeekHack have expressed similar impressions.  That, added to the solid sub-$200 price (a relative bargain when it comes to Topre switches), makes the FC660C a very attractive introduction to the world of capacitive switches.

While the FC660C has been elevated to my favorite capacitive switch keyboard, I'm still on the fence in comparing it to my previous favorite switch, the Cherry MX Red.  I decided to settle matters by purchasing a FC660M with Reds on eBay.  When it arrives, with all else being equal, I should be able to compare the switches themselves to come up with a clear determination.
Posted by admin at 7:00 AM 1 comment:

This inaugural post in the "Goods Resource" series features the forum community that taught me more about mechanical keyboards than I could have imagined when I was first exposed to Filco Majestouch models at Cleverly 2 in Akihabara:  GeekHack.

The GeekHack forums are where you can take the pulse of the online English-speaking mechanical keyboard enthusiast community.  You can learn what distinguishes the various colors of Cherry and Alps-branded keyswitches, or what makes Topre capacitive keyswitches better than standard membrane switches (despite the incorporation of a rubber dome in their design).  You can see what latest models from the Far East (China, Korea, and Japan being the biggest players and markets in the mechanical keyboard industry) are attracting attention and depleting wallets.  Having been out of the keyboard game for a while, I learned from my last visit to GeekHack that several U.S. or U.S.-accessible companies (Cool Master, Keycool, etc.) have entered the game.  Cool Master is particularly interesting, as they use the same manufacturer for their boards as Filco - Costar - but offer their products at roughly 2/3rds the price.  Cool Master also is the only player in the market that currently offers a tenkeyless board with Cherry MX Green keyswitches (the CM Storm QuickFire Rapid), which is reputed to be as close to buckling spring tactility as Cherry has been able to achieve.  I currently have one on order at Amazon.

That's the dual perk and peril of visiting GeekHack:  you come away with more knowledge in your head (and a potentially better typing experience at your fingertips), but less money in your wallet.
Posted by admin at 7:00 AM No comments: