My fascination with mechanical keyboards began with the metallic twang of the Model M attached to the first computers I used as a child.  But my initiation into the realm of modern, mechanical-switch keyboards can be traced back to a visit to Akihabara in 2008.  My primary business in Akiba was at the Mandarake doujinshi store, but once I'd finished up there, I explored that particular back street and found the Clevery 2 computer store, which specializes in peripherals, particularly keyboards.

(Sadly, going through my pictures folder, it looks like I didn't snap up one of the store itself.  Guess I was too starry-eyed at the time.  This image comes from the Clevery website.)

I tried my hands on every keyboard they had on display there, and in the end, a sturdily built (and $100+!) 104-key model with the name "Filco" emblazoned on it won me over.  Only the fact that I had come to Tokyo on a midnight bus from Osaka--and that I would be further laden down by the stacks of doujinshi I'd acquired from Comiket 73 on the trip back--kept me from purchasing it then.  Upon my return to the states, armed with the magical keywords "Filco" and "Majestouch," I discovered the geekhack.org forums, and was initiated into the world of cherry mechanical keyswitches.  I soon determined that the keyboard that had won me over had Cherry Black linear keyswitches, but that most typists preferred the softer touch of the tactile Cherry Browns.  Trusting the consensus, I purchased my first full-size Majestouch, with Brown switches, from beNippon. Over time, I would sell off the full-size for a tenkeyless model (one without the number pad), and expand my collection to include tenkeylesses with Black and Blue (tactile with a *click*) Cherry switches, along with a Topre Realforce 87U and a Happy Hacking Keyboard Professional 2.

I thought my foray into mechanical keyboards would end there, until I discovered through geekhack that Filco had released a tenkeyless model with the elusive Red Cherry switches--and, more than that, that it was available through Amazon

.   I immediately searched for it, and--despite a general moratorium on purchases I've imposed around tax time--purchased it.  There were twelve left in stock when I came across the product page, meaning that after my purchase there were 11.  I briefly wondered if I'd been too hasty, adding yet another $100+ keyboard to my stable.

The remaining 11 keyboards were gone by the next day.

My hope in purchasing this Cherry Red keyboard was to find a middle ground between the smoothness of the linear Blacks (which was my favorite Cherry keyswitch) with the lightness of the tactile Browns.  This was the general description of the Reds on geekhack, so I felt fairly confident that I'd finally found the best of both worlds in this keyboard.

Now, as I type this review on it, I can say that I have. 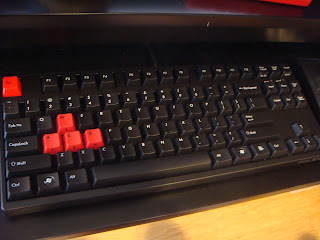 The "Limited Edition" keyboard came with the red WASD keys, while I had a spare red ESC from my other Filcos.  The keys depress with the same light touch that are the hallmark of the more well-known and widely used Cherry Browns (also used, for example, in the Kinesis Advantage Keyboard

), but without the tactile "hump" in the resistance curve that I personally find detracting.  Within an hour of switching to it, typing has become more natural to me as it has on any of the myriad keyboards I've used before. 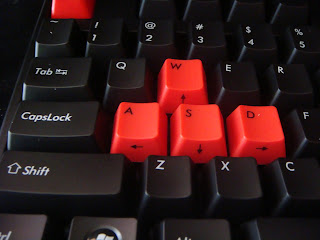 (Close-up of the red WASD keys) 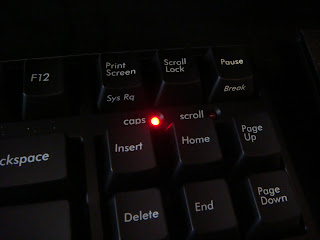 (As with the Filco with Black linears, the caps and scroll LEDs are red in this 'board.)

I've yet to use this 'board for gaming purposes, but as I tend to be a button masher, I suspect that the Black linears are still king in that department for me.  Nevertheless, I feel quite confident that I've finally found the keyboard I've been looking for these past three years.  As a writer and editor, the keyboard really is the definitive tool of my trade, and having one that suits my typing style so well makes every task that much more enjoyable. 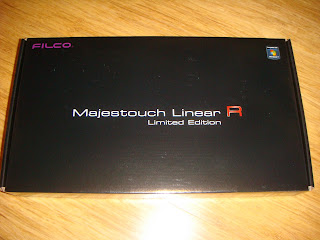 (The 'board comes in a understated black box with simple lettering.)

Beyond the keyboard itself, the other gem of the experience is learning that Filco keyboards are now available on Amazon.com, as they are sold by the Keyboard Co UK (and fulfilled by Amazon, meaning that super-saver shipping applies!).  The tenkeyless version is sold with both regular printed keys and a "ninja" side-printed version, as well as the full 104-key version

.  Also available are tenkeyless versions of the 'board with tactile Browns

, as well as full 104-key versions with Browns

A post by Lynn Flewelling (author of The Nightrunner Series and The Tamir Triad, both of which will receive their own fictional reviews in the future) on her blog Talk in the Shadows first alerted me to the BBC's modern reboot of Sir Arthur Conan Doyle's great detective.  Sherlock Holmes, John Watson, and 221B Baker Street are no strangers to either film or television, but the creators of Sherlock endeavored something that previous incarnations dared not to: shed the Victorian trappings of the original books--in which the milieu often plays as vivid a part as Conan Doyle's inventive plots--for more contemporary surrounds.  The result could have degenerated into a flimsy pastiche with familiar names pasted onto characters so disfigured by the "update" as to bear little more than passing resemblance to their origins.  Instead, Steven Moffat and Mark Gatiss (of Doctor Who fame) reinvigorate Conan Doyle's signature duo by seamlessly transplanting them into the midst of 21st-century London.

Heightening the writers' strong script and plotlines are Benedict Cumberbatch and Martin Freeman as Sherlock Holmes and John Watson, respectively.  Martin Freeman has made a career of playing the everyman, from Tim Canterbury in The Office to The Hitchhiker's Guide to the Galaxy's Arthur Dent, and he plays Dr. Watson's straight-man role masterfully.  At the same time, Benedict Cumberbatch's Holmes manages to evoke every eccentricity of the original without the benefit of the man's trademark deerstalker cap, capecoat, or pipe.  Together they possess a strong chemistry that evokes precisely the kind of quirky friendship that underscored Conan Doyle's stories.  Highly recommended for anyone in need of a good story, whether a fan of the original or not.

Available at Amazon.com in a two-disc Series One DVD