This post is the first in a series I'm calling "What's On Amazon," which will feature a product available on Amazon.com which I've purchased (usually from Amazon as well) and highly recommend.  These posts acknowledge that, while virtually anything you can think of or hope to find in a brick-and-mortar store is available on Amazon these days, that same massive selection can make it difficult to know exactly what goodies are for sale there, unless you actively search for them or are lucky enough to have them pop up in your recommendations.  "What's On Amazon" seeks to help fill that gap.

First up on "What's On Amazon": 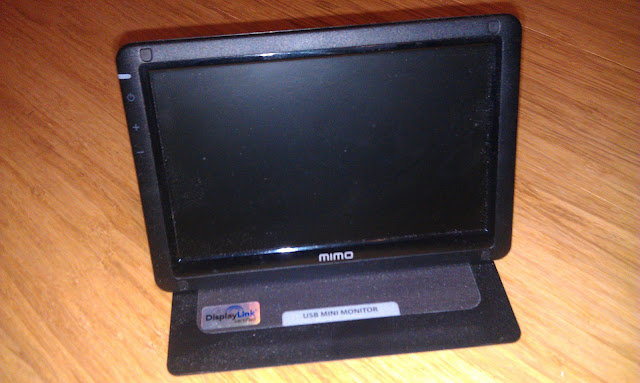 This is a MIMO USB-powered 7" portable LCD monitor.  It uses DisplayLink technology to connect to your computer via USB alone--no VGA plugs or AC adapters needed.

It folds down so that the stand functions as a screen protector, and at 7.25" x 5" x less than 1", it's superbly packable:


DisplayLink is plug-and-play for Windows 7 and Mac OS X Lion, as the MIMO works perfectly as a fourth (yes, fourth) monitor for my desktop and a secondary monitor for my MacBook Air.  I used to have a first generation Asus Eee PC Surf, so I've dealt with 7-inch displays before, and while the screen real estate is a bit cramped as a primary monitor, it works fine as a secondary one that you can use to refer to another document while working on your main screen, for playing videos, or as a dedicated mini screen for iTunes or uTorrent:


As of late, I've been positioning various settings windows on it while working on my doujinshi in Manga Studio 4.

The only critique I can level at the MIMO is that it could use a touchscreen interface, especially when I'm using it to display the settings windows from Manga Studio.  I've caught myself more than once trying to tap the screen with my Cintiq's pen to adjust the settings.  The virtually identical MIMO UM-720S model addresses this problem by adding touchscreen capability: